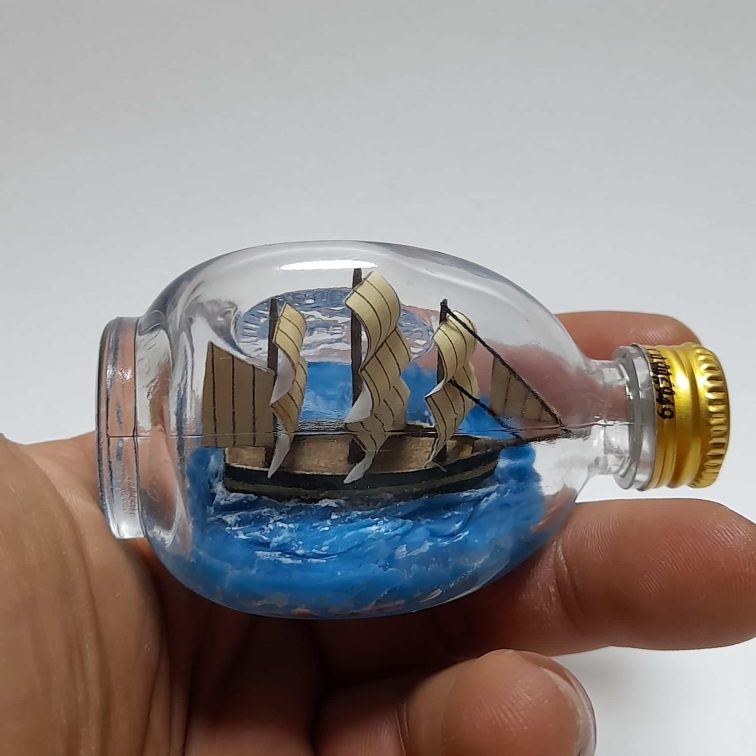 Welcome back everyone, how did your holidays go? I hope everything went well and that the gifts you carved made the furor they deserve! Today I wanted to tell you about something special, capable of capturing the attention of everyone, from adults to children, the precise art of ships in a bottle.

Having the chance to see a ship in a bottle up close leaves you stunned. You turn it over in your hands and look at it from every possible angle. It’s perfect, it’s beautiful and rich in details. The ship occupies its space inside the bottle in a uniform manner, everything fits, at least until the eye falls on the neck of the bottle. Beautiful, thin, long… but how did the ship fit inside the bottle!?

This I think is the question on everyone’s mind, regardless of the beauty of the ship, surely this is the main appeal that drives interest in these vintage items.

Navigation is in itself a fascinating thing. Although there are precise physical laws and countless studies that can easily explain how a ship can float, to look at it so simply, almost with the eyes of a child, it is a miracle that objects as large as a palace, made of metal, filled with thousands of people, can be able to sail the seven seas with such gracefulness.

A step into history

It seems that the first evidence of the construction of a boat dates back to the year 4000 BC, by the Egyptians, who had built one using long rods. After this first boat, history tells us of a progression in construction techniques and materials.

The undisputed usefulness of boats as a means of transporting things and people has led to the development of vessels of various shapes and sizes. The greatest cultures in history participated in laying the foundations of naval engineering that is still used today!

As we have seen the Egyptians, like the Greeks and Romans, play an important part, but there were peoples like the Phoenicians (1200 BC) who based everything on navigation. They were able to trade with all the peoples of the Mediterranean Sea and were the first to be able to circumnavigate Africa using ships made of cedar wood that were extremely strong and capacious for their trade.

Later, other peoples such as the Vikings (800 A.D.) with their long and slender boats, came down from Scandinavia in search of territories to colonize and were able to reach Greece, Russia and even touch the American coasts (Canada) well before the famous Christopher Columbus!

In 1824, the first iron ship was built in England. It was a real revolution, which changed forever the way of building and conceiving ships.

The maritime tradition, however, was kept alive by none other than sailors who built everything during their long voyages far from home. In fact, it seems that around 1800 the first ships in bottle were built by them.

Sailors used everything they could find on the ship: from pieces of wooden crates, to broken tops, sometimes even using whale bones to make hulls.

Even though there is no precise date concerning the first ships in bottle, the historical period of the nineteenth century is plausible, because, before those years liquor producers did not pay much attention to the aesthetics and design of the bottle, and therefore they were not compatible with the insertion of a ship inside them, because of necks or bottoms that were too narrow.

And here we’re back to where we started, but how did that ship get into that bottle?!

Over the years, every time I’ve come across a ship in a bottle I’ve made a variety of hypotheses:

Then one day, my curiosity finally got its day! I met Manuel Pinto, a young man with a passion for carving and a penchant for ships in bottle. For quite some time he dedicated himself to the carving of “Hillbilly“, funny country caricatures.

Then he started fusing hillbillies with figures of sailors.

to end up being struck by his new passion and dedicating himself entirely to ships in bottle. So I asked him to finally shed some light on the mystery!

Well yes, the ship passes through the neck of the bottle…. 😳😱 The hypothesis that seemed the most outlandish is the crude truth! Confirmed by the creator of these wonders….

Manuel loves impact sentences, just like he loves precision and the perseverance in improving himself. He is a researcher, an attentive and scrupulous person and I believe these are all qualities which are not only important, but also necessary if you want to embark on the path of trying to create your own ship in a bottle.

First of all, not only do you have to choose the ship you want to make and already here between: schooner, vessel, galleon, caravel, brig, etc.. already there is to indulge, but the main thing to remember is:

Almost like Harry Potter and the choice of the magic wand, it seems trivial but it is not. An error already in the programming phase leads not, to have an inaccurate work, as can often happen, and still be accepted when carving, but rather to throw away the entire project.

Oh yes, if you do not properly calculate the space available inside the bottle, or even worse, inside the neck of the bottle, you will be left with a model that will only look at its bottle from the outside without ever having the chance to get inside!

That’s why Manuel talks about construction plans, which are the technical drawings taken from the top, from the front, from the bottom…. This is the beginning. Based on this plan you can understand the dimensions of the ship you are going to develop, albeit to scale. Some ships have taller masts than others, or more pronounced and wide hulls, and are all things that you need to take into account, bottle, and especially, measures in hand.

Once this rock has been overcome – and this is appropriate! 😂😂😂 construction plan in hand, you begin to create, strictly on the outside of the bottle, the actual ship. We are talking about pieces that are even a few millimeters in size, if we consider that a hull is more or less 7 – 10cm long by 1 – 3cm wide!!! 😱🤯

Once the hull and its finishes have been created, we proceed to create a system that combines the masts and sails. This is an exquisitely technical part and serves to ensure that during the passage of the complete ship in the neck, everything is flattened, but that once inside, through a cable connected to the system, you can pull up the sails and masts in an upright position.

Once the necessary tests have been carried out, in terms of size and movement of the trees, we can move on to define the inside of the bottle and decorate it with sea, rocks, lighthouses, whatever our imagination suggests.

This, after doing all the millimeter ship construction seems to be the easiest part. Too bad you always have to consider that everything that goes inside the belly of the bottle has to go through the damn neck, guys let’s face it, we’ll never look at beer bottles with the same eyes again! 😂🤣😂

Manuel makes his backgrounds with plasticine clay, combined with soft cotton to give the effect of sea foam, but other materials such as epoxy resin can be used. All this, smeared, modeled, placed in the bottle at a considerable distance. For this reason, our patient creator of ships in a bottle has created his own tools, adapting everyday objects to his purposes.

With long, thin tweezers, the seascape is arranged and lastly, amid much prayer 😇, the ship is inserted. The rope is pulled and the masts are raised, showing the sails unfurled. You remove the string you cap the bottle with a nice cork and voila! The masterpiece is done!

With the exception of all the boats that, due to their size, cannot pass through the neck of the bottle, you can bottle anything by following this method! And as you can appreciate from the photos the effect is amazing!

This art, almost on par with fan-carving is not very popular because of the difficulty of execution. It is not a job for everyone to be able to handle and create millimeter objects with the precision of a Swiss watchmaker. As far as I’m concerned it’s quietly prohibitive! 😵

But for those interested in experimenting, our @iltimoneinbottiglia, Manuel, suggests the books that paved the way for him, both written by Captain Dan Berg. They are: Build a ship in a bottle and Shipwreck in a bottle.

This, as I told you, is not enough, you need passion, and a lot of it. You have to study the parts that make up the ships, draw the construction plans that are virtually impossible to find and then have patience, eye and talent for construction. A lethal mix that confirms why this is an art in the hands of few.

Luckily my job is just to talk about it, and to make as many people as I can aware of it so that this passion is not lost. In fact, let it be better known and appreciated everywhere in the world.

To become a child again for a moment while looking at that ship inside that bottle, I assure you, is truly priceless! Thank you Manuel for your work, and for having made us aware of the great mystery that continues to fascinate after 2 centuries of sailing in bottles!

Please note, all photos in this article are the property of
Manuel Pinto (@hillmanny and @iltimoneinbottiglia).

Any spread should be politely reported and please acknowledge the sources, thanks.

From time to time in articles you will find words underlined like this. These are links that help you learn more, or affiliate links. If you are interested in a product and buy it suggested by me, again at no extra cost, you can help me cover the costs of the blog. It would allow me to give you this and much more in the future, always leaving the content totally free. Better than asking for a donation or filling the page with annoying advertisements, isn’t it? 😉

In this article I have suggested the following products: